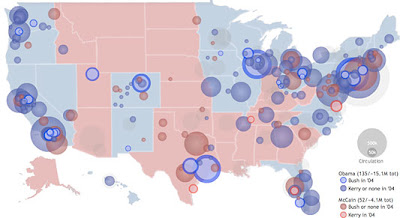 What does this say about Republican voters?
So far, Kay Bailey Hutchison has swept the field on newspaper endorsements across the state.
All the major papers have endorse Hutchison, and yet she is trailing Gov. Rick Perry badly in the polls.
On the other hand, all the same papers also endorsed Bill White in the Democratic primary and he is leading in his primary race quite comfortably.
So does this mean that newspaper editorial boards have more influence today with Democratic voters rather than with Republicans?
I think so to a degree. But I also think that in general most people are less influenced today by newspapers in favor of other mediums such as TV, Internet, social media, billboards, mass mailings, robo-calls, etc.
Which is also one of the main reasons why I want to see a lot less so-called "democracy" in this country where we depend on uninformed and indifferent voters to select judges, constables, state board of education members and many other offices that would be better served by a system of appointments.
Posted by Mike Thomas at 2/17/2010