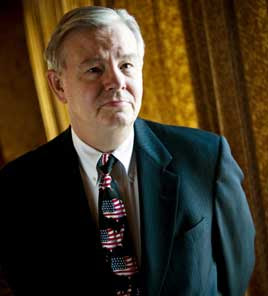 Congressman Joe Barton may retire in 2010, according to this post by one of his former primary opponents. (H/T to Brains and Eggs)
This delights me to no end. There is probably no one in Congress who I despise more than “Smokey” Joe Barton, mainly because of my personal connection to him. He was my Congressman when I was at Texas A&M and the last reminder of the huge mistake I made in 1984, the first year I was old enough to vote. That year I was completely enamored with Uncle Ronnie and his “Morning in America” tripe. And so I cast my first-ever vote for “the Gipper” and then proceeded to vote a nearly straight Republican ticket which meant that I voted for both Phil Gramm for U.S. Senate and Joe Barton for Congress. Reagan and Gramm are both gone now, but Barton has endured all these years, finally rising far above his level of compentence to become chairman of the House Energy Committee.
Fortunately, the Democratic tidal wave of 2006 brought that travesty to an end and stripped Barton of his chairmanship. Now it seems that his all-but-certain minority status for the forseeable future plus some unfortunate health problems are leading him to consider retirement in 2010 (and no doubt entry into a lucrative lobbying career for the energy industry that he has catered to all these years.)
Barton was always a reliable rubber-stamp for the “movement conservative” causes and has most recently used his senior status on the Energy panel to throw roadblocks up on efforts to address Global Warming issues.
Barton’s retirement will finally relieve my conscience for the huge mistake I made two dozen years ago, but it probably won’t result in better representation in Congress since Barton’s district is heavily Republican and will likely elect someone equally as wingnutty to his seat - just with less seniority.
Posted by Mike Thomas at 7/25/2008