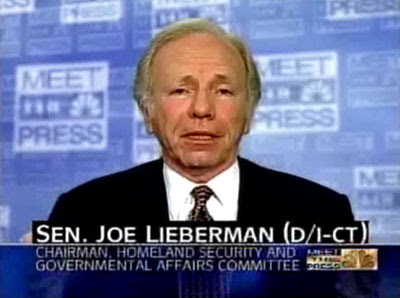 While looking at this video clip of Joe Lieberman advocating military strikes on Iran it suddenly occurred to me how utterly creepy he really is.
And then I began to wonder if we could have Lieberman all wrong. Maybe his decision to support the John McCain camp so aggressively was more strategic than we realize. Could he be acting like a top-secret agent/saboteur, helping to pull the McCain campaign down from the inside?

What other campaign would even consider having Joe Lieberman’s support an asset? Why does McCain want to be represented by someone who talks constantly about waging wars and starting new ones? Someone who makes a fool out of himself by taking transparently ridiculous pot shots at Obama such as the “He’s endorsed by Hamas!” canard?

And didn’t it just help to call attention to McCain’s recent verbal gaffes everytime Lieberman would interrupt him in mid-speech to correct him? Hmmmmm. Makes you wonder, doesn’t it?
Posted by Mike Thomas at 5/12/2008