Texas just got a lot bluer 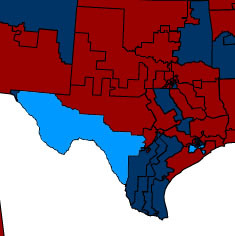 I’m still in shock this morning over Ciro’s landslide victory over the odious Henry Bonilla. I thought I was being overly optimistic to dare hope that Ciro might squeak out a narrow victory. I certainly did not expect that he would win in a 55-45 landslide. My gosh! This was a continuation of the “thumpin’” that Republicans got on Nov. 7. Bonilla did not just lose, he got his ass kicked!
The only polls in the district showed Bonilla winning with about 51 percent and that had put a big damper on my initial enthusiasm. But now it seems that the polls were flat wrong this time. Ciro’s victory means that Democrats had a 30-seat gain from the mid-term elections which is exactly what I had predicted. I could have won the office pool if there had been one.
I’m so happy that the voters in the 23rd District disregarded the San Antonio Express-News’ lame and moronic endorsement of Bonilla. We should all be happy that the “decent” guy won and the guy who ran the “abhorrent” campaign lost.
This was such a huge victory for Ciro that it pretty much cements him in place. A close victory would have meant that Republicans would have been back in force in 2008 to try and reclaim the seat. Now I would expect that effort will only be half-hearted at best. This election showed that Republican efforts to win over the Hispanic vote have gone nowhere lately and they have most likely lost ground.
I still can’t believe I’m actually going to be represented by someone in Congress who shares my values. Since I’ve been old enough to vote, with the exception of the three years that I lived in Connecticut, I’ve never had a Democrat representing me in Congress. In College Station in the late-’80s I was stuck with Republican Joe Barton. For a short time in Connecticut it was Democrat Rosa DeLauro, but then we moved back to Texas and I ended up with Lamar Smith who was representing the Kerrville area in the mid-’90s. In Lubbock I had Republican Larry Combest and when we moved to San Antonio in 2000 it was Bonilla.
And Ciro isn’t just your run-of-the-mill Democrat, he’s an unabashed liberal with a capital L. And while the court-ordered redistricting definitely made this race competitive, it was the Iraq war that made it a runaway landslide for the Democrats. So keep it up, Republicans! Keep our troops mired over in Iraq all the way into 2008 and you’ll think the “thumpin’” you got in 2006 was just a love tap.
Posted by Mike Thomas at 12/13/2006