Doing what he does best 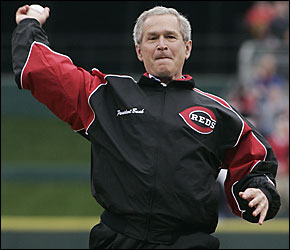 President Bush was out today doing something that I fully support. He was throwing out the first pitch of the new baseball season.
As a former part-owner of a Major League Baseball franchise, I think Bush is imminently suited to this task and therefore I’d like to suggest that he make throwing out first pitches the priority of his administration for the rest of his term. He should plan on throwing out the first pitch at every game throughout the entire season. This will keep him fairly busy, so he will need to pass on those other bothersome tasks of governing to someone else. Deadeye Dick Cheney is clearly not mentally or emotionally stable enough for such a task, so I say let Condi have a go at it. Lord knows she couldn’t do a worse job and it will also give her the practice she needs so she can be ready to run against Hillary in 2008.
This shift of priorities would also help improve Bush’s dismal poll ratings which might even hit the 50 percent mark again before he leaves office.
Take my advice, Mr. President! Let’s Play Ball!!!
Posted by Mike Thomas at 4/03/2006