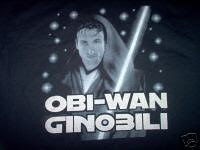 Obi-wan Ginobili
Originally uploaded by mwthomas87.
The San Antonio Spurs are currently mopping the floor with the defending champion Detroit Pistons after nearly sweeping league MVP Steve Nash and the Phoenix Suns. There should be little doubt that they are the best team in basketball right now.

So why then are we still seeing stories like this one?
Star-free finals are hurting NBA

Star-free finals? How can this be? The reigning champions of 2004 are playing the champions of 2003 and they are saying there are no “stars” on either team? How does one become a star if not by leading your team to the finals year after year? Tim Duncan is obviously a superstar and now Manu Ginobili is threatening to surpass him in star quality this season.
But the real problem turns out to be merchandise sales.

...The more immediate problem is merchandise sales, which are down 42 percent for the year to date.
"They're missing their chance to highlight their most popular players," said Neil Schwartz of SportsScanInfo, which tracks sales of sporting goods at 13,000 stores nationwide...
...part of the problem is that NBA fans have not warmed to the league's current crop of foreign-born stars...

Dallas star Dirk Nowitzki has the best-selling jersey of any foreign born star, but he's No. 24 in the rankings by SportsScan.
Houston center Yao Ming might be a huge star in China, but here there are 40 jerseys more popular than Yao's.
And both Nowitzki and Yao outsell any jersey worn by a Spur or Piston...

Spurs star Manu Ginobili, who was good enough to lead Argentina past the United States for the Olympic Gold Medal in 2004, isn't even on the radar on year-to-date sales.
"Pete Maravich sells more uniforms today than Ginobili," said Schwartz.

Perhaps that will soon change after the Spurs wrap up their third championship victory, but if not it would be a sad testament to the so-called fans of basketball. Why can’t people appreciate a team that just plays well together? Just because you don’t have one guy hogging the ball so he can score 50 points every game doesn’t mean you don’t have great players on the team.

These types of complaints are similar to the ones leveled against the New York Yankees during their run of three consecutive World Series titles in 1998-2000. That was probably one of the best teams in baseball from the past 50 years but you had no one other than perhaps Derek Jeter who stood out as a superstar. And now that the Yankees have filled their team with “superstars” they are not as good, so go figure.
Posted by Mike Thomas at 6/14/2005