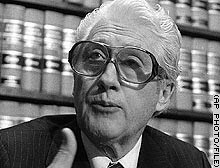 So Deep Throat turns out to have been the associate director at the FBI.
It all makes sense now, I suppose. J. Edgar Hoover had his thumb over every U.S. president going back to Calvin Coolidge. But when he died in 1972 Nixon probably thought he was home free and able to do anything he wanted. But then the No. 2 guy at the Bureau, a career G-Man and Hoover protege, steps up and takes him down.
And what is really amazing is that he didn’t do it for money, or fame, or anything else other than that he believed it was the right thing to do for his country.
I’m glad his family pushed him to reveal his secret before he died so that we can salute him before he goes.
Posted by Mike Thomas at 6/01/2005